What happens when you’re up at 4:00am, catching up on past episodes of White Collar just so that you can drool over the main character? Genius happens, that’s what.

You see, I tend to get my best ideas during such times. Perhaps it comes from staring for 45 minutes at such male attractiveness or maybe it’s just that my true genius only comes out at ungodly times of night. Then again, maybe the combination of both wrapped in a newly clean fuzzy blanket creates a perfect trifecta of inspiration. Let’s go with that.

After a few months of struggling to get myself to strength train, I decided to do exercises that I like. Genius, I know. 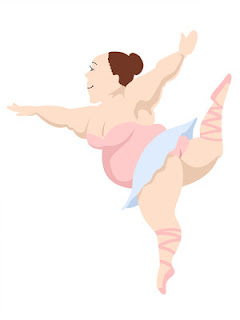 I had been searching for a good workout video to fit the bill but was sorely disappointed in several that I came across. They were just a standard cardio/strength training routine in pink leotards and wrapped in the “be graceful” gimmick. I know a fraud when I see one.

So I gave up on that and decided that I was doomed back to the weight training machine hell I’d previously existed in. It’s the fifth circle, just in case you were wondering. Then, a few weeks later, I decided to find out if fitness magazines had changed in the last six years and bought one. I was pretty sure I was wasting $4.99 to find out that the same articles has been included in my 2004 Shape subscription. I was right.

What I did find was worth every penny (plus tax), though, because the twice recycled workout they featured was ballet inspired and was almost legit. I made some modifications and went to town. I’ve been refining it over the past two weeks and including it at the end of my strength training workouts. I still do arms and chest exercises on machines, though, because I can’t remember what we used to do and I can’t do push ups.

The result: I’ve actually been looking forward to each of the strength training sessions. I eagerly wait for my muscles to recover from the last one so that I can do another round. I’ve spent the last two weeks burning from every inch of my body (that sounds like a personal problem, doesn’t it?) because of these sessions.

Yesterday I dubbed my particular variety of soreness/stiffness/wobbliness the Wizard of Oz syndrome. My legs had taken symptoms from each of the secondary characters. I was stiff like Tin Man in one leg, wobbly like Scarecrow in another, and roaring (good) pain in my core.

The problem now is that I don’t want to run. All I want to do is continue these exercises. I guess that isn’t a terrible down side but I do need to do cardio too. …and I love running. I mean, I really love it. Right now I just don’t like it. I’m too enamored with my newly re-found ballerina play. Don’t worry, though, there are not tutus involved.

Perhaps I’ll have to catch up on more White Collar episodes so that I can come up with another brilliant idea for how to like running again.

That IS genius — I'm really happy for you that you found a way to motivate yourself to strength train. But…I'm guessing that motivation is coming from your OTHER post about strength training.

What timing. I was just down in my basement to do some strength training according to something I pulled out of a magazine and literally yelled out loud "I don't want to doooo thisss uuuuughhh!!" I came upstairs and then thought wtf why don't I just go do whatever lifting moves I want for 20 minutes- what a concept! I totally forgot to do "coregasm" moves though. Good luck on the running love- sometimes it takes a few weeks off to actually want to do it again.

@ Rachel: Well… I guess I just have mutiple reasons now.

@Katie I know! I think that we've got the mindset of workouts as a chore so much that we don't work hard enough to make it fun.

I'm glad you found a workout that you don't hate. I'm a big fan of magazines though. I cannot help but buy the glossy, colorful pages that smell of perfume. Its addictive.

Did you ever try the New York City Ballet Workout? It's a DVD that was released a few years ago and dude. My sister could barely get up the stairs after she finished it for the second time.

Wow. I was totally with you until you got to the part about loving running. Running for me is like going to the dentist, or getting a pap smear. I avoid it.
But the Ballet thing sounds really really cool! I bet it takes a lot more strength than a novice would think to do some of those moves. I can only stand on my toes long enough to see if my husband's cookie stash is still on top of the fridge. In case of an emergency, of course!!!
Thanks for stopping by my blog! I can't wait to read more of yours!