So, there are some majorly scary and OMG NOTHING WILL EVER BE THE SAME minor changes going on in my life right now. I don’t like change. It makes me feel anxious and fidget a lot before just plain wanting a nap. A nap sounds really good right now, actually.

I might be exaggerating a little about how much I dislike change (though I still want the nap), but when several of them are about to happen at the same time, it can feel a little overwhelming. It can also make me want to eat a box of Samoa’s.

Can we just talk about Girl Scout Cookies for a minute? I’m pretty sure that they’re lovingly hand made by Satan, maximizing both the deliciousness of them and their ability to stick directly to my ass, thighs, and pooch. I’m also pretty sure that Girl Scouts are really just his little demon minions in disguise as cute little girls who get a little teary eyed when you say that your ass can not afford that box of cookies. 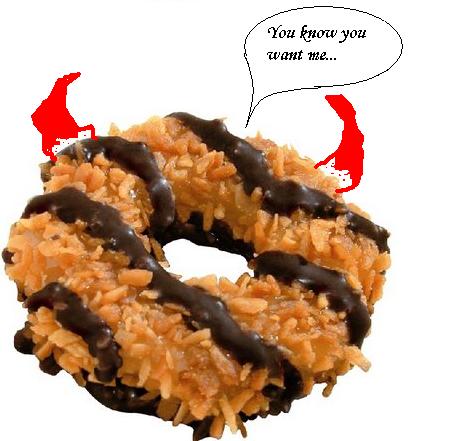 Yes, I was a Girl Scout.

My mom was the troupe leader which I think makes her someone really important among hellions.

I guess that explains a lot about me.

Oh, right, about me…

I’ve turned in all of the paperwork and am now waiting for a response. I will soon be in possession of my own apartment. I’m also in the process of getting a new and permanent assignment for my job. I’ll be living and working downtown which is exactly what I’ve always wanted. It’s also really scary because I’ve always wanted it.

Yet, it means that I’ll have my own kitchen (cue the Hallelujah Chorus), my own washer and drier (as apposed to the broken set I battle with now), and my own humble abode. Le sigh.

The new job will mean that I’ll get to play dress up in grownup clothing on a daily basis. The “business casual” practiced at my current office is a little more “casual” than “business.”

Ah, but those are not the only two changes…

If all goes according to plan, I’ll also be starting school and opera training again part time.

These things have been planned for a long time. I’ve been saving my money and biding my time but now that it’s time to take action… OMG.

It’s created one of those situations where I’m so focused on future events that I’m not thinking about my choices right now. My mental space is too full of “where the hell am I going to get a couch I can afford that hasn’t been shat on by a cat?” and “I wonder if I can fit a small dining room table in my bitty little space?” It’s just not conducive to also processing, “should I put down the devil cookie?” and “which is better, broccoli or Doritos?”

Long story short (as if that ship hadn’t sailed LONG ago), I’m having a rough week for healthy eating.