10.05.10 Weight Loss
Now, I know I usually don’t post twice and I certainly don’t share my food logs or pictures, but I had to tell you all right away about the Ginger Spice Gelato I just ate. I couldn’t wait… tomorrow is Skanky Tuesday and Wednesday is just too far away. I wanted to tell you about while it was still on the tip of my tongue… literally.
So, earlier today I talked about respecting my body, I was thinking about that tonight because, being on the edge of being sick, all I wanted to eat was pizza. Actually, I didn’t want to eat anything but when I thought of pizza I suddenly did get hungry. You see, when I’m sick, I just don’t want to eat. I had to remind myself that not feeding my body definitely constitutes not respecting it, though and felt determined to have a meal.
After fighting with myself through the deli, soup aisle, and frozen pizza section, I knew that the ingredients in those items were not things I wanted to put in my body and would not be things that would help me get better. I contemplated for a long time whether my craving for pizza was a mental one or a physical one.
In the end I decided that I really wasn’t sure and that if that was all I could stomach the idea of eating I had better get it from a wholesome source. I went over to the natural food market. As I was walking to the pizza section, I HAD to do a double take. There, in the dessert section was a Gelato counter. I cannot even describe how much I love Gelato. I mean, really, there are no words. 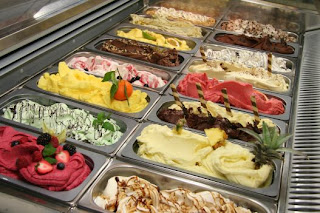 Then I spotted the Ginger Gelato.

Have you ever had your jaw drop in public? It apparently isn’t really socially acceptable but the guy behind the counter smiled at me understandingly. I tore myself away (reminding myself in the meantime of that whole respecting my body bullshit and why I shouldn’t be eating Gelato when I’m having sinus issues, yadda, Gelato, yadda… what was I talking about?) and went to look at the pizza.

I was once again sidelined by the smell of the soups. THAT was what my body really wanted. I smelled each of them and settled on the Hungarian Mushroom soup (after thoroughly examining the ingredients), which looked a little like Hungarian Mud but tasted and smelled amazing.
I happily walked back toward that checkout… but the dastardly Gelato counter distracted me again. I decided that a taste of it wouldn’t disrespect my body, so I asked if they had a super small child’s size. Maybe it was because I looked a little sick, or maybe I looked a little tired, or my eyes were bugging out like an aye aye, then again maybe he just thought I was cute (scratch all the other options, I like this one the best) but he offered me a half size “sample” for free.
One like and OMG. Really Oh Em Gee.
I’ve had Pistachio Gelato, I’ve had Lavender Gelato, I’ve had a love affair with Pear Gelato, but this…

After my recommendation to make your own Ginger Tea, I just had to share this with you.

I also decided that between the coldness of it and the ginger, it had to be good for my throat and help with the inflammation. Never mind ice cream after having your tonsils out, eat this!