You realize what this means, right? I’m only .4lbs away from my lowest weigh that I hit back in December. It means that I’m almost back to making new ground. It means that I apparently can get my shit back together when it feels like it’s all falling apart.

A few things happened this weekend that are noteworthy. First, I finished unraveling the web of “complicated” relationships I’ve started over the last several months. I felt both immense relief and a sort of “what now” emptiness. This one was the hardest to let go of. My dear Stoic who I really cared about but never treated right.

It was the right decision but it was also a very hard decision.

I didn’t realize just how sad I would be about it. It was an entirely different quality of emotion from what I’ve felt with any of the other endings. It still makes me want to cry. I’m trying not to look at the picture that was taken of us just before it happened. I spent Saturday night writing half a dozen blog posts about it that I will never actually publish. At least I’m letting myself feel it this time.

Oh, and I spent Saturday night snapping pictures of myself in true narcissistic style. See the new picture to your right.

Another noteworthy event from this weekend is that I looked at an apartment. It’s in the neighborhood that I love but it’s really small. I’m trying to decide if it’s worth it but I’m leaning toward yes. I can sign a six month lease and consider it my six month experiment.

When empty, the size feels slightly oppressive but I think that once I actually put some things in it that will make it feel like a home, it will be a different story. I actually quite like the idea of this experiment.

How can I make this hobbit hole a home?

A third object of note is that I found out that my toe is broken. Last Monday I went to a fundraiser for the Seattle Opera Young Artist Program and was accidentally stomped on by a stiletto. My toe hurt all week but I figured it was bruised. Nope, it’s broken. It’s the second time that I’ve broken that particular toe so I should have remembered how it felt right away.

Given that I’m actually trying to take care of myself again, is it okay to run on a broken toe? I mean, I don’t want to use it as an excuse to not work out but I also don’t want to do more damage. It doesn’t hurt that bad so it feels like a poor excuse but as I’ve all too clearly established already, I have a tendency to disregard things like this and push through when I shouldn’t.

The last weekend even to discuss is that I started my new birth control pills this weekend. I’m nervous for how they will affect me (weight, emotions, anxiety, etc) but it was the next logical thing to do.

Anyway, let’s talk about my goals.

1. Run twice toward the end of the week – Between taking “taking it easy” seriously, and finding out that my toe is, in fact, broken; this was not a goal that I should have passed. I went the smarter route and did not run.

2. Focus on whole foods – This was a mostly well done goal. I ate much more whole foods this week and had the BEST dinner on Friday night. I mean, doesn’t everyone eat uncured turkey bacon and green beans for dinner? Check out this culinary masterpiece. 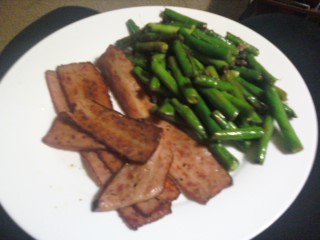 3. Cook – See that above picture? Yep. This is probably the only picture of a meal I’ll ever share but for some reason I felt like I just HAD to snap this picture. There was no logical reason for it. Anyway, I cooked a few meals this week and did better than I have in a long time but still not as well as I should have done.

1. Turn in the apartment paperwork – I’m pretty smitten with the idea no matter how scary is seems to me right now. I’m just going to get this thang started.

3. Exercise somehow twice – Figure out what won’t further injure my toe and do it!

4. Start Tracking all of my expenses – My apartment is going to cost me a whole lot more than I pay now but will also save me money on my commute and food costs (funny how my food seems to disappear in my current refrigerator). I need to take a look at what I’m really spending now and how I might need to make changes.

That’s all for this week, what are your goals?

Good job, lady! This story is all kinds of swell. Except for the toe, which is not swell, but swoll. Yuk yuk yuk.

I just caught up to my December weight. Stupid holidays.

I'm glad there aren't any holidays for a WHILE… so I can just keep on going along! Good luck to you too! I LOVE turkey bacon YUM!

Beautiful picture! I broke a toe once from dancing when I was a kid and I was told I could keep dancing? Maybe wrap a little tape around it? I don't know. Good work on the goals! Is there any good way to say "you're really nice but I don't actually want to see you anymore even though we aren't really dating but we shouldn't talk" ?

I love the new picture! Beautiful!

I just found your blog and have spent like 45 minutes reading through old posts (creeper much? guess so! sorry.) — love it!

I don't know anything about running on broken toes; I don't run. Like, ever. But I am a nursing student & last semester we learned that putting pressure on fractures *can* help force nutrients and blood and other such wonderful things into the fracture and help it heal faster.

Nice job on making your goals. The new picture is beautiful. I take that back. You are beautiful!

congrats on the great loss and getting back in to the groove. bummer about your toe. i hope it heals quickly!